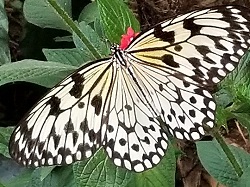 Have you ever visited a butterfly conservatory?

Recently, I went with a group of friends to “Magic Wings,” a butterfly conservatory in Western Massachusetts.  This was a very enjoyable and tranquil visit.

Inspired by the butterfly conservatory visit, I folded these four origami models of Honda, LaFosse, P. Jackson and Yoshizawa.

Imagine hundreds of butterflies, different sizes and with a variety of colors and patterned wings, fluttering around a warm, glass conservatory.

They would settle briefly on colorful tropical plants and flowers or on the numerous butterfly feeders before flying to the next nectar source.

As you stroll along the winding paths in the conservatory, butterflies might even land on you.  Rest on a bench in the gazebo.  Listen to the softly playing music in the background.

Pay attention to the tiny Chinese quails scuttling along the paths or darting in and out of the foliage.  Gaze at the group of tortoises crawling around their pen and remind yourself to s-l-o-o-o-o-o-w down. 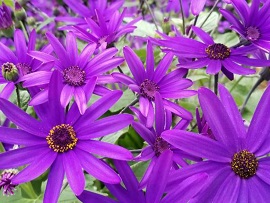 Spring flowers are here!  I love these early purple flowers.  Wish I knew the name of this plant.  Doesn’t the color pop right up!

This morning, I chose colorful jelly beans to fill my Origami lidded box.  Yup..I folded that box.  Crooked corners and all. 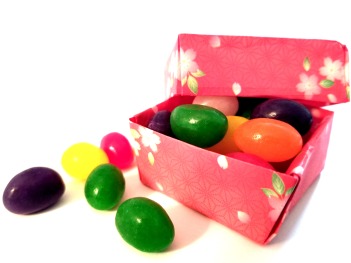 I read Tomoko Fuse’s Origami boxes, studied his diagrams and was sure they would be easy to fold.   Not so!

After a frustrating hour trying the “easiest” box model, I threw the crumpled pieces of paper in the trash.

YouTube offered me an alternative – a simple traditional Japanese box.  Another half-hour passed before I was finally able to fold the box and lid. 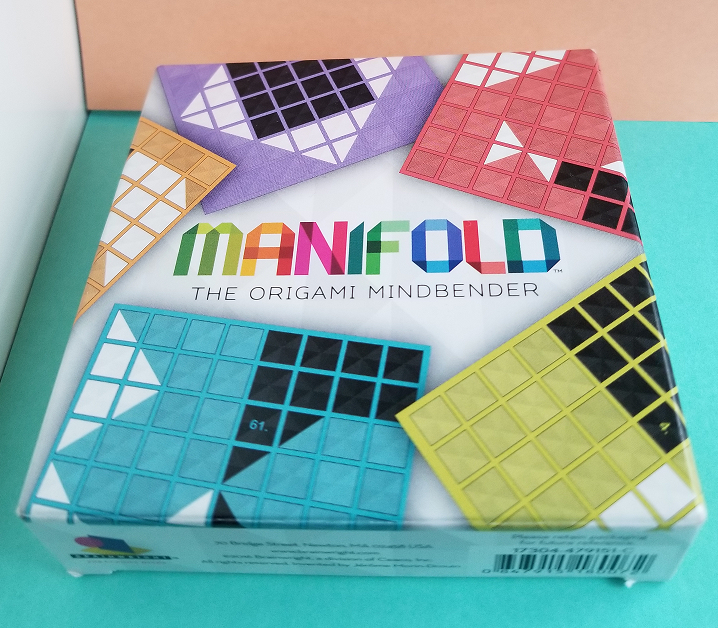 This was the gift a friend and colleague gave me last week called “Manifold.” He knew I loved Origami and would enjoy each folding puzzle as they became progressively more challenging.

Like a Rubik’s Cube, the goal appears simple enough; fold the paper so black squares appear all on one side with white ones on the other side. It helps to know basic Origami principles to find the solutions. 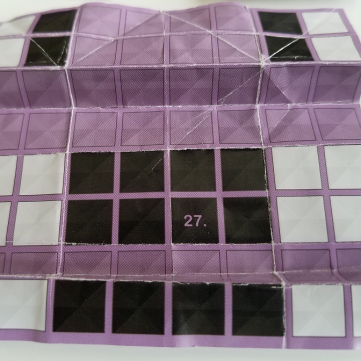 I’m on #27 now…and can hardly stop. The smooth, colorful papers feel fantastic under my fingers.  My brain is focused and I am so very calm, like meditation.  I’m in the Zen!

The puzzles pull me to them immediately on waking.  I fold on the commuter train to and from work, during meal times and before going to sleep…just about anytime!

“I have something for you,” a friend said to me.  “But, it is not Origami,” she added apologetically.

We were on the North Shore commuter rail.  The rickety old train was heading back to Boston’s North Station.   She had returned from a business trip in Scandinavia a week ago. 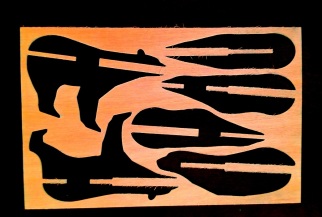 She handed me a little envelope with the writing “Lovi Polar Bear” in English and Finnish.  A delightful drawing of the animal was on the cover.   I vaguely remember having once folded a bear.

“It’s been more than six months since I did Origami,” I said and sighed.   I thanked my friend and carefully put the gift into a knapsack.

When I got home, I was curious and opened the envelope.  Inside was a thin piece of birch plywood with six shapes.  Each form had to be popped-out from the background.  There was a minimal diagram for assembly.

Indeed it was a bit challenging figuring out how the six pieces fit together.  After about an hour, I finally got it!  The polar bear emerged.  I loved it, as did everyone else who saw the finished work!

I thanked my friend profusely electronically including a photo of the finished model.

“What fun…I must return to folding,” I promised myself.

The third and final day of the OrigamiUSA 2018 Convention was all about experimentation and sharing information.

The three sessions I attended were:  Viviane’s excellent class on “Designing a Figurative Model” and the challenging “Corrugated Cardboard Crane” taught by Jeannine.

I also attended “Taro’s Origami Studio Workshop” — about the history of this workshop and the commissions they have received in the past.

Why was Viviane’s class so good?  Because we were each encouraged to design an original Origami model.  I was amazed by the number of students in the packed class who began playing with paper and suddenly produced an original design.

It was both surprising and hilarious as Viviane ran around the classroom photographing the newly “birthed” Origami model – some more abstract than others.  What a hoot!

I dare not show you the awful crane I folded from the corrugated cardboard in the next class.

This was very difficult to do as one needed accuracy and strength to “brute-force-bend” the cardboard into a crane.  My muscles were very sore after this class. 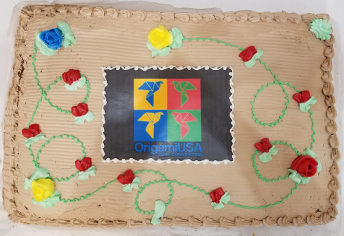 While waiting for the evening banquet closing the OrigamiUSA 2018 Convention, someone showed me how to fold a fish and gave me a sticky, googly toy eye to put on the model.

Another folder showed me how to create simple orange butterflies.

At least I folded something successful on the last day of the Convention!

The banquet was quite tasty.  For dessert, a delicious cake, decorated with the Convention logo, was practically inhaled by the diners.

At one point, we all ran to the windows  to see the gorgeous sunset on the city.

Towards the end of the dinner, attendees, such as myself, were instructed to tear off their “First Timer” ribbons which hung from our convention badges.

We were now official OrigamiUSA Conventioners!

This second day of the OrigamiUSA 2018 Convention at St. John’s University, Queens, NY, was even more exciting than the first day.

Our registration bags held reams of beautiful papers to fold during the convention.  Attendees folded everywhere: in the Hospitality Center, in our dorm rooms, and of course, in folding classes.  We were also given a terrific book with dozens of designs to fold.

My folding classes this day were an abstract Pig and a Wolf, an Eiffel Star and an Untitled Jeweled  Star.   I had another class but missed it because I returned to view the exhibits and browse through the Origami store.  When I looked at the time, I realized the class was almost over.

Regarding the Pig and Wolf designs: every fold only suggested the form of the animal.  It was a truly amazing design.  The teacher helped me a great deal as the turn or twist of the paper just so, animated the figure. 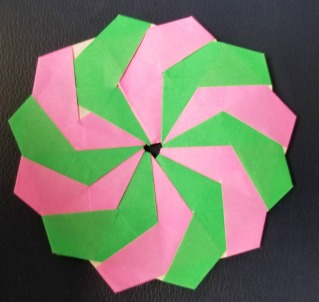 The Eiffel Flower design had a pink and light green whirling pattern..lots of pieces to fold and fit together.  The same could be said of the Untitled Jeweled Star. I’m going to have to work on accuracy of the folds since these designs are unforgiving.

A long walk around St. John’s University topped off the evening after dinner.  I did not have the energy to watch the over-sized folding where teams competed to fold a life-size Origami model.  I heard it was lots of fun the next day. 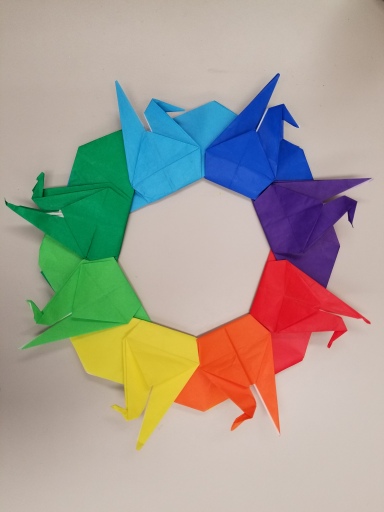 I gasped, oohed and aahed in awe of the dedicated Origami design creators’ and folders’  works in the exhibition.  Multiple times throughout the day, I stopped by the exhibit to study the folding techniques or just to admire the works.

The rest of the day was taken up with Origami classes.  To mention a few of my favorite classes:  folding a Kami Sleeve was fun.  The Kami Sleeve was designed to protect Origami papers.  The two-sided basket I folded for candies and what-nots was quite delicate.  I loved the multi-colored, eight crane modular mandala I folded which was  taught by a 17-year-old! 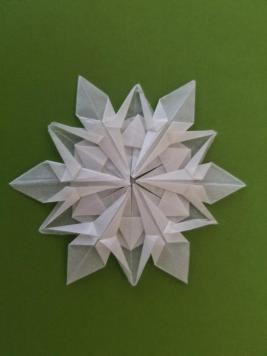 All of these Origami classes required quite a bit of concentration and dexterity…even if I was only a “low-intermediate” folder.

Since I was a “First Timer,” many people gifted me models they had made to swap with other folders.  I was surprised and delighted with these unexpected presents.

Jean, an Origami expert, teacher and OrigamiUSA Convention attendee for the past thirty-three years gave me a magnificent snowflake she folded.

I will always treasure this beautifully folded work!